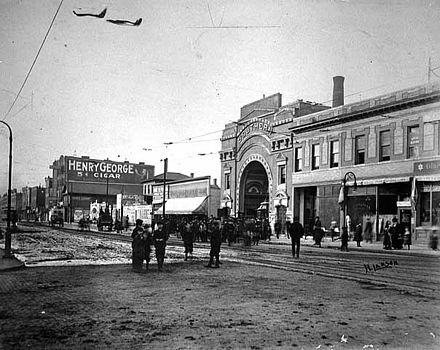 The Southern Theater first opened its door in early March, 1910. It was designed by the noted Minneapolis architect Charles S. Sedgwick (Other Sedgwick building still in existence include Westminster Presbyterian Church). The original theater build was essentially one large room with seating capacity of approximately 650. The proscenium arch, still a major feature of the Southern’s architecture, framed the stage, which had an orchestra pit in front of it. Underneath the stage were the dressing rooms, as visible on the drawing to the far right (These dressing rooms still exist, but are covered by a concrete slab). As the “Transverse Section” shows, the theater floor sloped downwards-- one can still see, inside the theater space, the bricked-in tops of doorways just a few feet above the current floor.

The original facade was built to mimic the design of the proscenium arch. Regrettably, the facade was demolished during the 1940’s and replaced with the art-deco-like facade which the building now has. But to begin at the beginning:

The Cedar-Riverside area reach the height of its importance as a Scandinavian community between 1880 and 1916. In the 1900’s, this area was known for it abundance of saloons, theaters, and ethnic meeting halls, The Southern was built as the area's only legitimate theater, presenting play in Swedish by the contemporary playwrights of the time such as August Strindberg. The acting company maintained close ties with Stockholm’s Sodra Teatern (Southern Theater); an exchange program allowed actors from one Southern to perform with the other when visiting the others’ city. On Saturday afternoons, children’s matinees of silent films were presented at ten center a ticket. There is a photograph of the theater full of children waiting such a movie. (A photo was taken from the stage, and one can see the mustachioed accompanist at the bottom center) As is evident from this photo the detailed painting which is visible in some part of the theater has not been done at this time: newspaper accounts of the thate’s opening rcount the decor as being “green throughout”, the green being visible at some locations.

In the 1920’s the Southern offered silent films with occasional evening of live drama, vaudeville, and amaeur variety shows. In the 1930’s, with the arrival of talking pictures, it because a neighborhood movie theater and was renamed the Southtown. (It must have been during this period that the more ornate decor was painted on the walls) During the 1940’s it provided adults only films, and in 1945 the theatre became the property of the State of Minnesota by default. In 1947, one Kermit L. Bonander purchased the building and converted it into a garage for his contracting business. Still-visible signs of this chapter fo the building’s life included the bricked-in garage door opening on the side of the theater and the large iron plate and right height upon the rear wall, which was used to support a crane to lift truck engines. It seems logical that it must have been he who lelbed the floor of the theater into it more-or-less current configuration.

The building served for awhile as Lillian’s, Inc., a gift and antique shop, and in 1959 the Gaslight Restaurant opened at this location. The Gaslight was rather well-known into the 1960’s as being a “fancy” place to dine. The restaurant itself was actually divided up into many smaller rooms; it even featured a balcony-like section toward the right-hand side of the stage, which explain the series of rectangular holes where joist once penetrated the theater walls. (The Gaslight also bored a small hole down into the old dressing room area and used this space for a wine cellar; the hole was so small that only very slender busboys could make the trip to and from the storage area).

The Gaslight closed in mid 1960’s, and the building stood vacant for about ten years. In 1975 the Guthrie Theater took out a lease on the space, remodeled it to its current configuration as a small experimental theater, and in 1976 opened the “Guthrie 2”. In 1980 the building was purchased by an independent nonprofit organization and renamed “The Southern”: now a home for the finest Twin Cities-based, as well as national and international, independent performing artists.