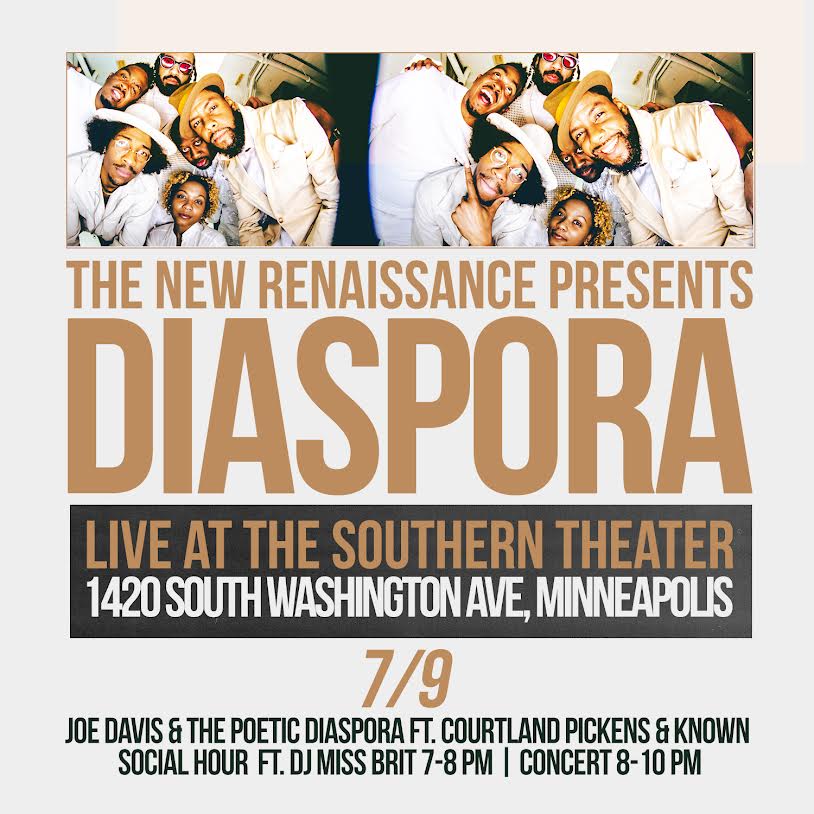 Tickets: $10 in advance, $15 door
Schedule:
7:00-8 pm Social Hour + DJ set ft. Miss Britt
8:00-8:15 Intermission
8:15-9 pm Courtland Pickens & KNOWN
9-10:00pm Joe Davis & The Poetic Diaspora
Joe Davis & The Poetic Diaspora
Joe Davis is nationally-touring artist, author, speaker, and educator based in Minneapolis, MN. He employs poetry, music, theater, and dance to shape culture. His work has been featured on BET, CNN, and VH1. He is the Founder and Director of multimedia production company, The New Renaissance, co-creator of JUSTmove, racial justice education through art, author of We Rise Higher: Poems & Prayers for Graduates, and the frontman of emerging soul funk band, The Poetic Diaspora.
Joe Davis & the Poetic Diaspora is a soul funk band creating poetry-powered freedom songs for the next generation. Journeying through the sonically diverse realms of old school and new school hip hop, R&B, funk, and soul, the collective seamlessly blends melodic harmonies, smooth instrumentation, and raw, poetic energy to tell stories of struggle, resilience, and celebration. Formed in the heart of the Twin Cities, Minnesota, they're dedicated to crafting vibrant soundscapes around honest narratives that reflect their community's sacred humanity. Each song is an ancestral echo, a battle cry calling for freedom, an unending dance for justice and joy, welcoming all of the diaspora home.
JoeDavisPoetry.com
Courtand Pickens & KNOWN
Courtland Pickens is a local singer-songwriter with a powerful presence in the local community. In 2017, he released his gospel EP entitled “The Manifest Promise,” and he was also a top audition finalist on NBC’s “The Voice” in 2016.
He is the founder and director of KNOWN, an audition-based, Twin Cities community youth choir. The choral ensemble was established, in the later part of 2019, as an extension of Voicez, Inc., a 501C, non-profit music organization striving to train and develop the next generation of singers and composers throughout the Twin Cities Area. They utilize performance-based music education to galvanize youth between the ages of 12-25 as agents of change by promoting self-esteem, leadership skills, cultural awareness, discipline and a commitment to excellence
Voicezinc.org/knownmpls
DJ Miss Brit

DJ Miss Brit’s sound is as diverse and unique as her client list. With a sonic aesthetic rooted in eclectic soul and hip hop she tells stories by weaving between the genre’s of funk, soul, r&b, trap, electronic, hip hop, afrobeats, and more. As a former spoken word artist and media personality her voice and musical blends have been waking up audiences for nearly a decade in radio and television.
DJ Miss Brit has been the official DJ for celebrity parties, international institutions, national sporting events, elected officials, and other high profile clientele. By night she DJ's and by day she's a doula and maternal health advocate who incorporates music and sound healing into her client's healing practices. DJMissBrit.com/
Covid Policy: Proof of vaccination or a negative Covid test within 72 hours of performance is required by The Southern Theater. Masking will then be optional for this performance.